DUBAI—This week, Emirates National Oil Company (ENOC) marked a major milestone in its plans for Expo 2020 Dubai, which will open October 1, 2021, when it unveiled its “Service Station of the Future,” a fully functioning station that harnesses the power of renewable energy sources including solar and wind, the company announced.

The official Expo energy partner has incorporated futuristic and energy-conserving elements in the station, which received the world’s first LEED platinum certification for such a project. Platinum is the highest rating a green building can receive. EXPO 2020 Dubai, originally planned to open in 2020, will run from October 2021 to March 31, 2022.

The most striking feature of the station is a uniquely designed canopy, shaped to resemble the exoskeleton of the Ghaf, the UAE’s national tree. The canopy has 133 individual layers and was constructed with 37-plus tons of carbon fiber, a lightweight, sustainable alternative to steel.

The canopy encloses a leaf-shaped ethylene tetrafluoroethylene (ETFE) cushion canopy, said to be 100% UV-ray-protected and corrosion proof. It has more than 3,800 LED light modules that can change color as needed. The nine tree “trunks” that support the station were built from carbon fiber.

In addition, the canopy holds 283 solar photovoltaic (PV) panels capable of generating 143 megawatt hours of solar power annually. The station is also the first in the region to use an on-grid wind turbine for power generation, which will produce 12.7 megawatt hours of wind energy annually. The station will provide hydrocarbon fuels (petrol and diesel), plus offer electric charging stations. Non-commercial users will be able to use free electric charging services until Dec. 31. 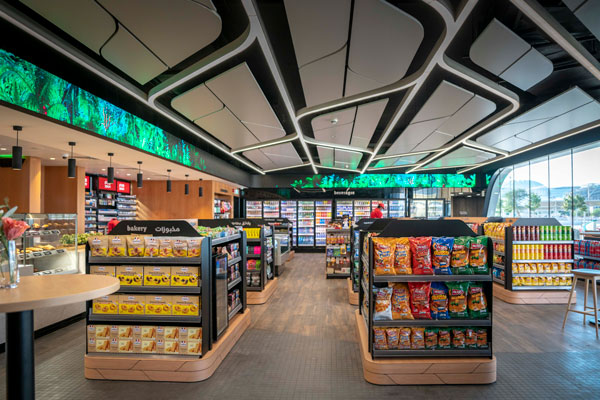 The station relies on carbon filtration technologies to recycle and reuse grey water for irrigation. Drinkable air units use ozonation techniques to convert water molecules from humidity in the air into drinkable water for onsite. The service station also features several applications of advance machine learning, artificial intelligence and data analytics technologies that help customize services and retail offerings, manage waiting times at the forecourt and enhance the customer experience.